So, 4 weeks ago – 4X7 = 28, the mythological “28 days” – I deactivated my Facebook account. I did so very much on purpose: a great part of what was happening on Facebook was nourishing just and only the worst parts of myself. Not everything about my FB experience was bad, but a few things were irreparably destructive. I’ll have a few things to say about both, although much more about the bad than the good. I’ll finish with a few words, not in the way of explanation or justification, but simply in the way of my own thoroughly dumbfounded phenomenological observation, about why I can’t take my eyes off this train wreck. 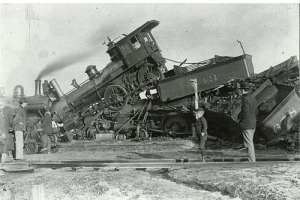 But before proceeding, just a quick note about the title. There is a well established fairy tale amongst the “detoxification” professionals – that is, the people whom other people pay so that the first people can be declared “clean” of some addiction or other – that 28 (to 30) days is the magic number for breaking an addiction. It is, of course, complete twaddle. However, people – especially people with money – will pay serious money to be declared “clean” as long as the only serious commitment is the money that they have in abundance. Should real life-style changes, time and discipline, and major revisions of habits and beliefs be involved, they simply will not pony up the cash. So by fabricating the 28-Day myth, detox and rehab centers are able to show their stockholders what magnificent profit margins they enjoy, with the magical imprimatur of famous celebrities who take a month’s vacation from their self-destructive life-styles at these various centers. “Win-win,” as “they” (whoever “they” are) always apparently say. So I lit upon the idea of my own 28-day vacation as much as a personal joke as anything.

Let me talk first about the good things.

I have made contact with a number of interesting people whom I’d have never come into contact with except on account of the networking possibilities of Facebook. Some of these people may actually share a similar impression of me. Moreover, there are a great many purely informational sites and organizations who are much easier to track on FB than even at their own internet URLs. Two examples that spring immediately to mind are Project Gutenberg and NASA. Berkeley Breathed’s reboot of Bloom County, after all these years, is available online only at FB. All of the information that can be found on FB can also be found at the non-FB websites (when these exist.) But the matters presented at FB have been “pre-filtered” and highlighted so as to bring out those items that are of greatest immediate interest to the casual observer. (The fuller data sets still exist, of course, for those who wish to engage in deeper investigations.)

In addition, there are friends and family I’ve met in “the real world” with & for whom FB is a primary vector of communication. Many of these people have “fun and interesting” things to say, and I very much enjoyed keeping up with them, particularly given the difficulties of time & tide associated with that often over-rated “real world.” But herein also lies the biggest source of problems.

Let me talk now about the bad things.

I originally signed up on FB to keep in communication with my family at the time when I had taken on the responsibility of oversight and management for my father’s primary care (he had dementia that required full-time professional attendance.) My family and I knew ourselves to be different from one another, but those differences did not count when we were together at family gatherings (weddings of my niece, and later, nephew, for example.) When first initiated, the connection via FB was not merely amicable, it seemed even joyful; a regaining of a closeness that had long previously been lost due to geography.

I can say now that connecting with my family on FB may well be the biggest mistake of my life. There are things I have done (when I was younger) that might easily have had more immediately horrifying consequences. But in terms of actual consequences, nothing I have ever done was so wholesale and irrevocable.

You see, most of my family are fundamentalist Christians with extremely conservative views about society and politics. These are the people who form the ideal audience of right-wing propaganda outlets such as Fox “News” and its ilk. I will skip over the gory details of the various events and exchanges that occurred. Suffice it to say, however, that as a result of that FB experiment, I am now less likely to communicate with my family than I was before FB.

Similar (if generally less dramatic) incidents have arisen with people with whom I’ve much more in common than anything as simplistic and accidental as genetics. People with whom I’d much rather burst out in joy upon sight, smile and embrace, have a beer and yatter idiotically for long hours, than wince and engage in a painful dance (← not safe for the infantile) around “owie” topics. And yet, this was the direction some of those conversations on FB were going.

Did I gain anything from my 28-day detox? No, in fact: not a thing, not a thing of any long-standing use, at least. I remain the same angry, isolated individual I was before. It would take a far more far-reaching change to the structures of the world and my-self for anything substantive to occur there.

So, why I am I returning to FB after 28 days? Well, in once sense, why not? While I can’t seem to climb out of this hole, neither do I seem to be in a position to dig the hole any deeper. Meanwhile, there are a few points that do deserve mentioning.

The second point is for myself only. For the next little while (28 days?) my intention is to not comment on anyone else’s posts, and to only share things like my occasional blog entries and, possibly, funny cat pictures. The latter are the only things that the internet is genuinely good for.

Lastly, I cannot but wonder if the existence of Facebook is the thing that creates the need for Facebook? I have lived in relative isolation in the past, without feeling pressed by the need to develop what, in many cases, are artificial forms of contact and interaction. Would I actually miss Facebook if I’d never encountered it in the first place?