(This is a “hot button” topic. If you’ve not commented here in the past, then I encourage you to read my policy on comments and spam before commenting now.) 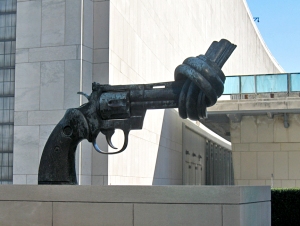 This last piece of nonsense deserves special attention, given that the absence of basic reasoning is so manifestly stark. The claim essentially amounts to insisting that since gun control laws cannot be 100% effective (which is to say, completely eliminate all forms of gun violence), then they can only be completely ineffective and useless. In other words, even if gun control laws only reduced gun violence by 1%, those 330 lives saved each year (since we slaughter over 33,000 annually), simply don’t matter. And let us apply the above “reasoning” to other laws: making murder illegal has not ended crimes of murder; so by the same argument, we should make murder legal. The same approach applies equally to every other law and regulation out there. END_OF_DOCUMENT_TOKEN_TO_BE_REPLACED