I was not an especially “outward looking” or alert youth, working rather to shut the world out rather than invest painful consideration into something that was already almost unbearably painful. But occasionally my habits of thinking would turn themselves outward, to chew on a puzzle that had managed to break through my protective shell and demand my attention. This happened twice that I can recall in high school: the first time, after an especially depressing episode I realized I needed to make a study of reading people – perhaps, more importantly, I realized that I could learn this, and I began picking up clues effectively and rapidly. The second, and first genuinely philosophical moment, was when I “discovered” the “problem of evil” as it related to the born-again Christianity I’d been emotionally bullied into accepting by various members of my family – personal responsibility is a joke, of course, in any world dominated by an omniscient and omnipotent creator god. This began my “angry atheist” phase, which went on for another decade (until I’d actually read a substantial bit of philosophy.) 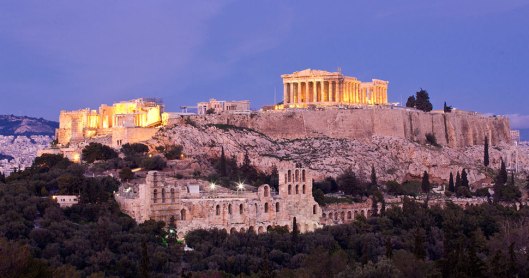 The third “break through” (second genuinely philosophical one) happened when I was in the army. I was stationed some 18 kliks from what was (at the time) the East German border, in the Central German highlands, as an electronics tech in an Improved HAWK anti-aircraft missile battery. Every year, each such unit chose a squad of people to be sent to NAMFI, Crete, to spend a few days training, culminating in firing a live bird at a drone target. As it happened (then, at least), the entire trip involved several days both before and after the actual training which were free time for the troops to explore the island or, as several of us chose to do, take the ferry from Souda bay to the Piraeus and Athens. So it came to pass that I climbed the steps up the hill of the Acropolis. Except, that’s not quite right. Nobody actually walked on those steps, and it wasn’t out of respect for their antiquity.

Back when those steps were laid into the side of the hill, it was so that citizens and others could more readily climb to the top and worship (or otherwise pay homage) to the Gods, at the various temples built at the top (the temple to Athena being the largest and most famous.) The steps themselves were great, solid blocks of marble, each placed a longish step apart, but forming – in its day! – a functioning staircase to the peak of the Acropolis. However, that day was some 2500 years ago. After two-and-a-half millenia of feet walking on those steps, they’ve been worn to an evenly convex, glass smooth slide running from the top to the base of the hill. Persons attempting to walk on them now would slip, smash their heads on the marble, and shoot down that slide to the bottom, leaving the path behind them wet with their own brains. So we all walked along the dirt path to the side.

So I asked myself, “when” did those steps “cease” being steps? Even at that time, I knew to scare quote the preceding terms, because the question as framed was and is meaningless: it presupposes a moment, an instant, when this happened, when in fact it has been occurring imperceptibly for millenia. This is “the problem of self-identity,” the problem of discrete thinghood and continuous transformation. I wound up writing my Masters thesis on the subject. Shifting gears for the remainder of this blog post, I will here gloss that thesis and its conclusions.

Wherein, then, does a thing’s “thinghood,” its “self-identity” (identity as a self, as the individual thing it is), reside? Much of Western philosophy has focused on discovering a “substance” or an “essence” which is the “being” (which is the “is”, as it were) of the thing in question. But what if we take a cue from artists, and look not for what the thing “is”, but rather at the “negative space” that tells us something about what the thing is not? There might even be a Zen koan that variously expresses this as, “what stays the same when everything changes?” Yet another way of saying this would be, “can we talk about changes in the world that leave the ‘thing’ invariant?” The answer is “yes,” and there’s a large body of mathematics that explores this very topic.

To my left is a glass with a beverage in it. I can “transform the world” by rotating the glass; the world has changed, but the glass remain invariant. I can pick the glass up, and then set it back down. I can set it down in a new spot, and rotate it. I can then reverse all of these transformations, and return the glass to its original position and orientation: the world has undergone various transformations, but the glass remains invariant. This invariant core is known as the “center” of the group of transformations.i This center of invariance is what we call a “self-identical thing.” Notice that that “self-identity” does not adhere to the material content of the thing, but rather to its functional relationships (note the plural!) to the world of transformations in which it is embedded. Different functions would present different identities. I leave the room for a moment, and while I’m gone, one of my cats knocks the glass off the table and it shatters on the floor. When I come back, I ask my friend, “where’s my glass?” and she points to the broken shards down below and says, “right there.” The bare identification of material objects works, even though the ensuing transformation was irreversible and destroyed the structural features that made it a drinking glass (but the physical matter is all still there.) I leave the room for a moment, and my friend pours my beverage into a Dixie cup, so that the glass can go into the dishwasher. I come back and ask, “where’s my glass?” and she points at the beverage container and says, “right there.” The structural purpose has been retained, even as the physical matter has been entirely traded out. Physical matter versus structural purpose – these are just a couple of the axes along which transformational invariance might center itself.

Of these two poles, however, the one oriented along physical materiality is in many respects the weakest. Let us go back to my original, unbroken glass. Even without any intervention from my cats (and honestly I believe this glass would just bounce on the floor without breaking) every time I touch the glass – no, more, every last photon that interacts with the atoms composing the glass – the glass itself is materially different. Think again of the steps at the Acropolis. Some matter might be added, but more likely matter is taken away. Absent significant violence, this glass will probably out last me as a material thing. But given enough time and handling, it too will wear away like the steps of the Acropolis. Those material transformations are, in point of fact, NOT reversible. Qua physical thing, the transformations operating on the glass do not form a group, because ultimately even the littlest, little one of them cannot be truly undone. The mathematical entity in this case is known as a “monoid”; it has the other rules of a group, but the reversibility rule no longer holds always or in general. The concept of a group is a useful abstraction, viable as an abstraction (just as is the concept of a perfect sphere, or a friction-free surface), but ultimately limited as a final, “absolute” model of reality.

There is no substance, no essence, only a functional system of relations that is itself sensitive to the context of use and analysis. So, in conclusion, I might just add: welcome to process metaphysics …

iTechnically, the center is what remains unchanged when one collection of transformations is related to another collection, by a function called a “homomorphism.” But this introduces an unnecessary complexification into an already complex story.