“Personalism” is the philosophical position that the first principle in any approach to the world must be that of “person.” Given the habits we have inherited over the years from our scientific (scientistic?) approaches to reality, this might seem like a hopelessly subjective approach to things. But such an attitude is wrong on at least two accounts: first, personalism is NOT the same as “subjectivism” – not by a long shot! The second major flaw is that there is nothing at all “hopeless” about it; indeed, there is a case to be made for its logical necessity. This last point is open to dispute to a degree that the first is not, and I’ll be focusing on this point a bit. Toward the end of this post, and in fulfillment of my priority to keep things Whiteheadian on this blog, I’ll gloss a few areas where Whiteheadians and personalists disagree, and the major point where they overlap. (Spoiler: Whitehead was not a personalist.) 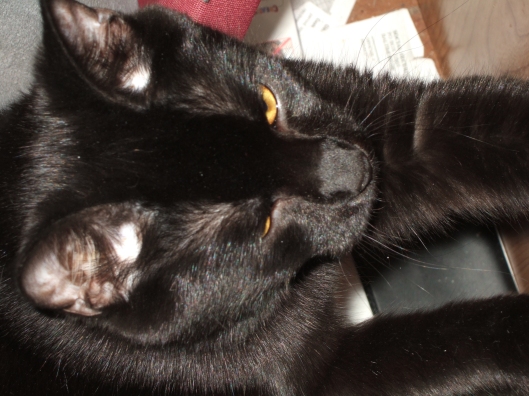 I’ve no idea what picture to use for this post, so here is a picture of my cat, “Bluesy,” who is neither subject nor object, but rather person.

A point of terminology: if, along the way, I have cause to use the term “objectivism,” it should be clearly understood that I am not in any way, shape, or form, referring fatuous pretensions to philosophy. I am merely using the word as a modified form of “objective,” to discuss such forms of emphasis that focus upon the “outer as outer;” a similar caveat holds with respect to the terms “subjective” and “subjectivism.”

The terms “subjective” and “objective” refer to modes of “experience,” but that does not necessitate any kind of personal, cognitive, or even organic/biological, phenomena. We habitually associate the word “experience” with a kind of organic cognition, but there is no reason why we should do so. Whitehead uses the term “experience” to characterize the dynamics of an electron’s processual reality; it has both an internal (subjective) and external (objective) “experience” in its process of becoming, both in its “self,” and in how it projects that “self” into the world. In Whitehead’s system, the internal coming-to-be of any actual entity is the “subject” aspect of that entity, the external aspect is called the “superject,” and the external world relating to that entity is the “objective” world for that particular bit of becoming. The details of all this are multitudinous and subtle; the last time I tackled this in earnest, I had a senior coauthor, and the result was 370 pages and almost 178,000 words. It is actually a pretty good book, if you’ve got the loose change. But in the meantime, you’ll have to forgive the extremely abbreviated discussion above as the best that can be managed in a 1400 word blog post.

Appearances to the contrary notwithstanding, the above is not a digression. Rather, it helps illustrate some few of the differences between the subjective and objective, on the one hand, and the personal on the other. Because none of the above required the introduction of personhood to make an intelligible (if rather non-standard) argument about subjectivism and objectivism. If the latter can be discussed without the former, then there is no necessary connection between them. This is the first law of metaphysics: What is actual is possible. In order to be necessary, it cannot possibly be otherwise. If, on the other hand, one can actually talk about the subjective and objective, without bringing in the personal, then there is no necessary (which is to say, “not-possibly-otherwise”) connection between the two.

Above, I introduced the word “personhood,” so I now need to say a few more words about that term. “Personhood,” in its most obvious sense, means the quality of being a person. But this quality needs to be strictly differentiated from the quality of being human. This goes to the deeper issue that a person, in the personalist (and, for that matter, Whiteheadian) sense of that term is not primarily a human being. Animal rights activists can be personalists, as can Whiteheadians; on this last, many Whiteheadians also work closely with various forms of “deep ecology” environmentalism. Personalists and Whiteheadians can be (and often are) deeply religious, albeit seldom (if ever) conservative or orthodox. On this latter point, it is worth noting that the Reverend Dr. Martin Luther King was a personalist (though not a Whiteheadian); King went to Boston University to study under the personalist Edgar Sheffield Brightman, who occupied the chair named for the personalist Borden Parker Bowne (who may have originally coined the word “personalist”), as well as adopting much of his concept of the “beloved community” from the personalist Josiah Royce. One of the few points of criticism I would offer in regard to any of King’s writings is his unfortunate choice of the word “personality” in his famous Letter from a Birmingham Jail. “Personality” has taken on an exclusively psychological meaning which is not at all what King intended. So, in reading that letter, one should substitute the term “personhood” for “personality,” in order to attain a much fuller and clearer sense of King’s meaning. In any event, gods and angels will be persons without ever being human beings.

For a personalist, the category of “person” is metaphysically primary: all genuinely first philosophy must begin with the notion of “person.” Physicalists and others who are deeply entrenched in narrowly scientistic concepts of nature will, of course, adamantly oppose any such move; only bits of matter and energy can “truly” be real, for these folks. But the personalist will listen to such histrionics and patiently point out that all such clever theories must first presuppose a theoretician before they can have any meaning or content whatsoever: take the person out of the picture, and you have no physical theories of any type, true, false, or otherwise. Moreover, why should something like “truth” even matter, unless a specifically evaluative stance is taken from the outset? For the personalist, persons and values are essentially coeval, and must both already be in play before anything like science can even emerge as an abstract possibility. This claim should not be underestimated, even though our habits generally incline us to dismiss it out of hand. It has only been with the emergence of the physical sciences that we have become jaded toward the value orientations we must adopt before we can have any access to reality. This liberated science from the shackles of medievalism, but has come to blind it to its own presuppositions.

Which brings us back at last to Whitehead and personalism. For Whitehead, “value” is intrinsic to both the objective and subjective becoming of any actual entities. (The best discussion of this remains Jude Jones’ book, Intensity.) But a “person” (in Whitehead’s sense) is a highly synthetic realization of complexly ordered groupings. Whitehead will refer to such ordered groupings as nexūs, at their lower degree of organization, and (at higher levels of organization, which include the personal) societies of actual entities. For Whitehead, a “person” (which is to say, a personal form of societal organization) is a very particular kind of society. But even here, the sense of “personal order” that Whitehead is working with is highly abstract, and not at all the kind of focused, concrete agency that a personalist would take as the foundational processual moment in her philosophy.

For a personalist, the concept of person is “atomic” in the original Greek sense; which is to say, it is primitive and cannot be reduced to smaller terms, or more “analytically basic” notions. (The word “atom” comes from the Greek atomos (ἄτομος) meaning “uncut” or “indivisible.”) At the same time, personalists, almost without exception (I say “almost” only because I’m trying to cover my bases) agree that a person is a process, not a substantive “thing.” For a personalist, values emerge from the process of personhood, and can only be real if they are founded on that “atom,” that “quantum of explanation.” For Whitehead, that role of that quantum is filled by the logical structure he calls the “actual entity,” and personal forms of order emerge from structured “societies” of these, which are themselves bound into an organized whole by the shared values. In neither instance, however, do values get swept aside as merely “subjective,” since for both lines of thought the subjective and the objective are not primitively given facts of the world, but emerge from more basic characters of reality, and are bound together by the values that organize them into the structures they happen to be.