So, this just happened. The self-promoting and galactically stupid Scottie Nell Hughes, neo-fascist Trump-booster extraordinaire, sincerely declared that “There are no such things as facts.” Looking at the full discussion – in addition to Hughes well-demonstrated inability to engage in any activity which might be mistaken for showing minimal signs of intelligence – it is clear that Hughes was genuinely characterizing her own viewpoint. How absolutely precious. 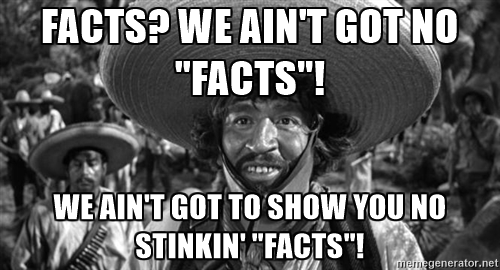 It is ironic – given how new-wave fascists lack the miniscule intelligence needed to appreciate irony – that they have for so many years decried liberals for their supposed “relativism.” It is clear enough, once you think about it, that these sorts of extremists have no clue what the word “relativism” might mean. But one way to break down the differences between conservative and liberal approaches to the world might be this: the conservative believes that there are fixed rules that one simply obeys, while the liberal believes that the world is a dynamic process which must be inquired into. Because liberals do not believe in such fixed rules, conservatives accuse them of believing in relativism. However, because conservatives do not believe in inquiry, they are the ones who actually practice relativism. END_OF_DOCUMENT_TOKEN_TO_BE_REPLACED