A review of The Harvard Lectures of Alfred North Whitehead, 1924–1925: Philosophical Presuppositions of Science, Edited by Paul A. Bogaard and Jason Bell. Edinburgh University Press, 2017.

One of the single greatest regrets of Whitehead scholars everywhere was Whitehead’s desire that all of his papers be burned after his death. His wife Evelyn dutifully fulfilled that wish, leaving the scholarly community with an enormous gap in its grasp of Whitehead’s thought, and the nature of its development over the years. Whitehead, for his part, wished for no such scholarly interpretations to be imposed upon his thought; his books, Whitehead believed, should be read and interpreted as they stood, with no “extraneous” materials being used to interpolate further ideas, “between the texts,” as it were, that were not already explicitly stated in those texts. 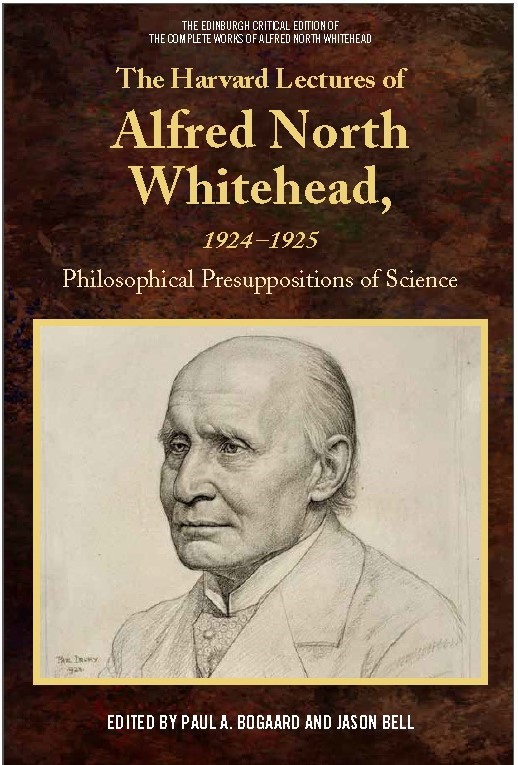 In one respect, Whitehead’s wish was not all that unreasonable: authors in general want their works to stand and be judged on their own, and not second guessed by readers using materials the author has specifically left out. There are, however, at least two problems with this desire. The first is that as soon as the work exceeds the complexity of a “Dick and Jane” story, the difficulties of interpretation amplify significantly. The second problem is that, regardless of the complexity of the work, the author’s wishes are always going to be ignored by scholars. And when the two problems are operating together, that scholarly interpolation will, unless it is anchored by some substantial body of secondary materials (such as that which Whitehead had burned), often enough run riot in untethered speculation.

This latter is precisely what happened with Whitehead, and it shows up most clearly in the work of Lewis Ford. Ford, in his influential book The Emergence of Whitehead’s Metaphysics (Albany, NY: SUNY Press, 1984), speculated (rather freely, one might add) that Whitehead invented a notion of “temporal atomism,” and this notion dominated all of his metaphysical works, from 1925 on. The fact that such a term appears nowhere in Whitehead’s corpus, and that – arguably, at least – a careful reading of Whitehead’s available texts completely undermine any such claim (See Randall Auxier and Gary Herstein, The Quantum of Explanation: Whitehead’s Radical Empiricism (New York: Routledge, 2017)), this thesis nevertheless exercised considerable influence over the Whitehead community for many years. With the publication of The Harvard Lectures, we can finally put such groundless speculation to rest.

To describe the work of the editors Bogaard and Bell in putting these materials together as “monumental” almost seems to unfairly minimize what they have achieved here. Since Whitehead’s own notes are lost to us, the editors have turned to those notes taken by students of Whitehead – who went on to become important scholars in their own rights – during lectures that Whitehead delivered at Harvard in the time after he retired from his academic position in Great Britain and took up a professorship at Harvard. (A brief, biographical sketch of Whitehead’s life and career may be found here: http://www.iep.utm.edu/whitehed/#H1.) This first volume covers the years from 1924 – 1925, which is a vitally important period in Whitehead’s career. It is during this time frame that Whitehead’s transition from the philosophy of science (as expressed in his triptych of works from 1919 – 1922, Enquiry into the Principles of Natural Knowledge, The Concept of Nature, and The Principle of Relativity) to the metaphysical works of his Harvard years was taking place. The materials covered are precisely Whitehead’s lectures on “Philosophical Presuppositions of Science,” in which the themes of the continuity or atomicity of space and time, precisely the topics which Lewis Ford so liberally speculated on. The notes provide no support for Ford’s thesis, as Whitehead repeatedly insists upon the role of continuity in both space and time.

There continues to be space (so to speak) to argue about the role of quantum mechanics in Whitehead’s thought. There are numerous discussions of the topic in these early notes, but those discussions can go no further than the materials that were available to Whitehead at that time. Recent historical studies have demonstrated that even by the fifth Solvay Conference in 1927, questions about quantum mechanics were still very much up in the air, even – and even especially – among the physicists working most closely on the theory. The proceedings from Solvay, when they finally came out, were published in French, a language with which Whitehead enjoyed no facility. Further volumes of lecture notes – which this scholar certainly hopes are forthcoming – may well shed greater light on this topic. For the time being, as coauthor of the previously cited book The Quantum of Explanation, I’ve yet to find anything in these lecture notes that would reduce my confidence in that book.

But as a follow up to that statement, it is important to emphasize just how much material there is to be found in these notes. The authors of these notes (W. P. Bell, William E. Hocking, and Louise Robinson Heath) are “old school” note takers, by which I mean they all took detailed and comprehensive notes. Thus, even discounting the book’s front matter, editorial introductions, and very substantial index, there is still some 530 pages of notes by these three individuals from a single academic year at Harvard. Coming in at some 625 pages total, this is a truly substantial work. Insofar as there are any such persons as “casual readers of Whitehead,” this book is probably not for them. Rather, this is for the serious scholar, the one for whom the study of Whitehead’s thought is a lifetime commitment. The details this one volume provides for understanding Whitehead is itself more than one person could adequately digest after a year of study. For this reason, there is one sense in which the electronic edition of the book is to be preferred: one can do a text search on words and strings that will be more comprehensive than even what the exceptionally complete and thorough index can provide. But this very strength in turn becomes a potential weakness: one becomes tempted to skip through the volume, searching on narrowly defined concepts rather than reading the development in its proper sequence.

That development and that sequence is a vital part of this volume’s contribution to Whitehead scholarship. Whitehead was a genius, to be sure; but he was still a human genius, and not a comet that shot across the Western intellectual sky. These notes show us Whitehead in the process of thinking, and not a mere lecturer dishing out canned and completed ideas. Persons not involved in academia (or whose only involvement is administration … ) often lose sight of the fact that it is a professor’s job to profess; that is, the finest gift a professor can bring to a classroom of students is to actually do the thing the professor is there to talk about. This means that, in classes other than surveys or introductions, a scientist gets up in front of the class and actually does science, the philosopher actually philosophizes. In these notes, we witness philosophy happening, from one of the single finest minds in the entire Western canon.

A scholarly work well beyond the reach, price wise, of your typical student, this is still a major work that should find its way onto the shelf of any serious philosophy library, whether departmental or college. For the dedicated scholar, this belongs on the private shelf as well.

1 thought on “Reading Between The Texts”