So, the Senate’s report on torture has come out. Former Vice President Dick Cheney, as singularly despicable a human being as has ever crawled out from under a rock, assures us that this program was approved at the highest levels. Is a crime a crime if Important People decide not to call it such? For example, the excuse given by one active participant in the CIA’s blatant torture of prisoners (conducted without regard for the prisoners’ guilt or innocence – to say nothing of basic human decency – and the repeatedly demonstrated FACT that such methods never produce reliable information; more on this momentarily) was that three out of four past Attorneys General of the United States had approved of the practices. 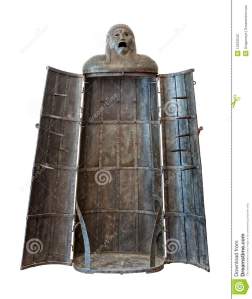 As Jon Stewart points out in the previous link, the three were all Attorneys General appointed by the Bush administration, which administered the programs of torture as a matter of policy orchestrated at the highest level. Stewart’s approach – via satire and such humor as one may bring to bear in the face of our public complicity in crimes against humanity – to the contrary not withstanding, his argument nevertheless bears appreciation. We are all tainted by the guilt from these overt and unequivocal war crimes and crimes against humanity, perpetrated in our names and sanctioned by our elected officials. So how do we calculate that responsibility? (← THAT is a loaded question; pretend for a moment that it is not.) Even when we have opposed those actions, there is a meaningful sense in which we have profited and suffered from them. How is one to perform the arithmetic that sums up just how much guilt we bear here?

For example, I’m a tallish (6’1”) white male, relatively height/weight proportional (185 lb’s), and as such I automatically walk into any and every situation with statistically measurable advantages over women, persons of color, those who are overweight, and so on. Even when considering those advantages I’ve genuinely worked for (my standing in Whitehead scholarship, for example), all of that work was additionally bootstrapped by the otherwise unearned white male privilege that is so intrinsically a part of the context of my life that only by significant imaginative effort can I come to recognize its presence. And that recognition remains in the abstract; my concrete experience, always and everywhere, is as a privileged tall white male. As a person with a genuine concern for justice, how do I repay that debt?

When we consider the enormities that went into constructing that privilege – the centuries of black slavery, the millenia of sexism, the wars of conquest, the genocides of native peoples, the voices silenced, the lives snuffed out – how do we sum that all up? I submit that any approach that casually tosses around notions like “calculate” and “sum up” in the context of ethical inquiry is not only fundamentally misdirected, it is at least implicitly enabling and justifying the torturers, as well as their apologists and enthusiasts. Issues of morality are far too complicated to be reduced to arithmetic; they are far too qualitative and multidimensional to be treated numerically, and they do not combine and compose themselves in linearly manipulable ways. (Numbers work in arithmetic because they are absolute, definitive, and utterly simplistic identities.)

The theory that tries to turn moral/ethical evaluation into a calculation is known as “utilitarianism.” There are many forms of utilitarianism, some more intelligent than others John Stuart Mill‘s version is an example of the most intelligent and subtle utilitarianism to be found. Mill is, without question, one of the most fundamentally decent human beings who ever lived, a hero of human liberty everywhere, and a man whose progressive vision was easily a century ahead of its time. But that does not change the fact that his philosophical theory is fatally flawed. Quite aside from the above mentioned issues of calculation – and all forms of utilitarianism, even Mill’s, depend essentially not just on the possibility of such calculation, but its actuality – there is a second and perhaps even more fundamental problem with the utilitarian approach even Mill’s.

While some degree of calculation relating to most effective means for obtaining an end is a necessary component in any rational form of ethical inquiry, that calculation cannot stand on its own; there must be some goal at which the calculation is aiming. But where does that goal come from? The utilitarian answer is typically “the greatest happiness,” or “the greatest pleasure,” or even (more vaguely) “the greatest good.” Ignoring the difficulties of saying what those phrases mean, what makes this problematic for utilitarians is that these criteria are external to the (impossible in principle) calculation which is the essential core of utilitarianism. Which is to say, one cannot provide a calculation to show that these are the best things to aim at, since it is that very (and altogether impossible) calculation that is supposed to show how you are to achieve them.

Which provides us with sufficient tools to return to the subject of torture. You see, the torture advocates are, all of them, utilitarians. They are essentially claiming that they “calculated” that, to achieve the “greatest good,” they had to perform a few unsavory acts so as to increase the overall happiness of the world. Their calculation was that the happiness/good added to the world greatly exceeded the “little bit” that was subtracted by their actions; the happiness which their torture subtracted is dwarfed by the happiness that it added. See! It is all just arithmetic!

There is a reason why civil rights movements such as those led by King and Gandhi eschewed utilitarian principles. It is because some things are simply wrong, regardless of how many other people are made “happy” by them (the “greater” good, arithmetically), and no amount of calculation will change that. Things like “justice” are ideals; and insofar as they are real, they are not reducible to a calculation. Insofar as you are not convinced that some such ideals are real, you are a sociopath and should stop pretending otherwise. Ideals do not have to be actualized to be real. (Yes, I am insisting here that some types of possibility &/or potentiality are real without being actual. Actuality is reality stripped of a significant part of its possibility, namely, those possibilities that have been reduced to mere abstractions.

As Iris Murdoch – among many others – has noted, there is not separating metaphysics and morality.) But calculations must be actualized in order to have any reality at all. Otherwise, they are not a calculation of any kind, just a vacuously stipulated moment of wishful thinking, a mere abstract possibility lacking any real potentiality. Hence, the problem with utilitarianism. And so, when the atrocity of American torture of prisoners, conducted without any regard to purpose or principle, but justified by the claim of a “greater good”, is exposed for all to see, we find ourselves in the presence of objective evil, and must ask ourselves how we are to wash ourselves clean of such a stain. Because with or without our explicit consent, we have been made the participants in the consequences (much as I cannot shake off the stain of tall white male privilege.) The monsters who would defend these crimes are sociopaths incapable of adjudicating principles (of which they have none) or making calculations (which are impossible in principle.)