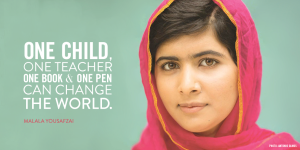 However, there’s a hitch.

You see, Stanford has “standards.”

In particular, Stanford has the SAT, the meaningless entrance exam that is required of all applicants who fail to be the spawn of wealthy donors. It is a well known fact that schools like Stanford, or the Ivies like Harvard, give a special pass to children of graduates, especially when those graduates have leveraged their privileged positions to such a degree that they can amplify that leverage with donations to their alma maters. Other kinds of exceptions are freely offered whenever the school sees some political or financial gain as a significant possibility.

And because Ms. Yousafzai has not taken the SAT, she does not meet Stanford’s demanding “criteria.”

It is worth noting here that these criteria – as “established” by such standardized exams as the SAT and the ACT – are effectively meaningless. An increasing number of studies are showing that these test have NO PREDICTIVE VALUE when it comes to either academic success (in the form of GPA) or graduation rates. So useless are these tests, that an increasing number of colleges are dropping them as a requirement for entrance.

The problem with standardized tests is that they presuppose a theory of measurement that has no legitimate application to human beings and educational processes. In order to make a measurement, the thing being measured must manifest some form or kind of uniformity that can then be broken out into standard and interchangeable units that can then be counted. This is no mean set of assumptions. Criticisms of the monstrosity that is standardized testing may be found all over the web. (Diane Ravitch’s blog is as good a place as any to start.) However, the issue is not limited to just and only education or social measurement. Fundamental problems of both a methodological and metaphysical kind remain unaddressed in, for example, contemporary gravitational cosmology.

Many schools have abandoned these meaningless tests for the personal interview and an essay. As it happens, Ms. Yousafzai has actually demonstrated a measure of skill as an essayist – you see, not many incoming Frosh have delivered a speech before the Nobel committee and Swedish royalty. In addition, and with regard to the interview part of the process, Ms. Yousafzai may actually have already demonstrated that she has the whole “personal presence” thing more or less under control.

But fear not for Americas waning academic performance in the world! Such trivialities will not be permitted to count anywhere in our premier universities on the Left Coast!

Because, you see, Stanford has “standards.”

14 thoughts on “We Have Our Standards”